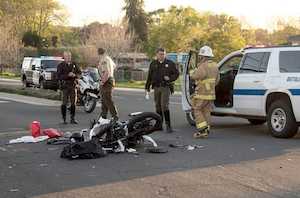 Those who routinely ride on a motorcycle will tell you that there is no other form of transportation that can match it for a sense of freedom and excitement. It also shows others that you have a soul for adventure and that you’re not just “one of the crowd”. This is partly the reason why you see motorcyclists nod to each other when they’re traveling on the Boynton Beach highways. However, you may also be interested to know that riding a motorcycle in Boynton Beach is also a potential invitation to serious motorcycle crash injuries. The statistics for motorcycle-related accidents are definitely eye-opening and a cause for concern.

According to the Florida Department of Highway Safety and Motorcycle Vehicles, in 2016, there were:

But even more distressing is the fact that in 2016, Florida had 5,286 motorcyclists that were killed in motorcycle accidents. That amounted to an increase of 5.1 % from the previous year. This placed Florida at number 2 for the state with the highest number of motorcycle accident deaths (just behind Texas) and 80 more deaths than the state with the third greatest number of motorcycle fatalities! Indeed, motorcycle fatalities account for one-fifth of all motor vehicle deaths in the state.

While there are many motorcyclists that choose to wear a helmet in order to provide safety for themselves and their passengers, not all of them do. In Boynton Beach (and the entire state), it’s required that all motorcyclists under the age of 21 wear a helmet. If the over 21 motorcyclist chooses not to wear a helmet, then it’s mandated that they carry at least $10,000 of insurance, in case of an accident. This is according to Statute 316. 211. Sadly, though, it has been reported that only one in seven motorcycle riders wear helmets with one in five riders carrying no insurance at all. While it’s been mentioned that riders without helmets must carry $10,000 worth of insurance, the average cost for a motorcycle fatality is about $1.48 million.

Who Is Responsible For Your Motorcycle Crash

Just like all other types of motorists, motorcycle drivers are expected to follow the rules of the road that apply to everyone who is driving. But, one of the common problems that face motorcyclists is that according to the law, they are allowed (and required) to have the full lane for themselves, without trying to ride abreast of each other. But this is something that a lot of drivers of other vehicles tend to ignore.

When a motorcyclist becomes involved in an accident, they still have to show that they followed the mandated duty of care. When filing a lawsuit against the other vehicle driver, they need to show that the other driver was the cause of the accident through their careless and negligent actions. As such, the standard four items that need to be shown in order to bring a successful lawsuit against another driver are:

Other dangerous road conditions that are common in Boynton Beach involve rain. This can turn normally safe roads into ones that feature slippery surfaces that may result in motorcycle skids. This is also why it’s important to ensure that your motorcycle tires are not worn, in order to maintain maximum traction when riding on potentially slippery roads.

The state has enacted a number of statutes that address the safety of motor vehicles on the Boynton Beach highways and roads. Some of these include:

Damages You Can Claim For After A Motorcycle Accident in Boynton Beach, Florida:

These damages account for both economic and non-economic damages. However, there are also punitive damages that may be awarded. For punitive damages to be considered, it should be shown that the defendant acted in a manner which illustrated that they were; malicious, intentionally reckless and/or wanton.

It is also suggested that if you plan to file a lawsuit, that it should be done as soon as possible. That’s because the statute of limitations for a Boynton Beach personal injury case is four years from the time of the accident. In cases that involve a fatality, a wrongful death lawsuit statute of limitations is two years. In addition, the more time that passes, the more difficult it can be when locating your witnesses. There may also need to be an investigation regarding road conditions, if these played a part in your accident.

Boynton Motorcycle Crash: How To Protect Yourself After An Accident

When it comes to being involved in a Boynton Beach motorcycle accident and dealing with motorcycle crash injuries, there are several things that you should try to do:

Deaths and injuries from negligent driving decisions can be the result of catastrophic motorcycle crashes, which may occur in Boynton Beach at any given time. In addition, it’s important to understand that while high speeds are often a factor, there are also many times when this isn’t the situation. There have been a number of cases in which a very low speed motorcycle crash has resulted in an injury that eventually led to a person’s death. The injuries involved may include brain damage and various internal organ injuries. Therefore, even if you are involved in a motorcycle crash that occurred at any speed, it is advised that you seek medical care and the advice of a motorcycle accident personal injury attorney.

Discuss your case with a Motorcycle Accident Personal Injury Attorney Serving Boynton Beach Today! Turn to Frankl Kominsky for comprehensive legal guidance. Call (561) 800-8000 or use our Contact Form to set up a free consultation.

Free Consultation
Local Injury Lawyers
Top Causes for Motorcycle Accidents
Local Motorcycle Accident Lawyers
Additional Locations
Client Reviews
★★★★★
I have had experience in the past using other attorneys and law firms however the attorneys and staff at Frankl Kominsky are by far the best experience I have ever had. Thank you for everything this law firm has done. I recommend this law firm to everyone. By Bruce
★★★★★
This was an amazing injury law firm. Steven and his staff was available when I needed him and were always following up with me. I felt very fortunate that I found them. It is true that this law firm will never settle for less! I fully recommend this law firm to anyone that needs a hardworking and results oriented law firm. By Consuelo
★★★★★
Mr. Frankl came very highly recommended by two separate peers. I had a handful of lawyers to choose from and I chose him. He moved quick, no nonsense, and very effective. Before I knew it everything was handled and I had a serious burden lifted. If I ever have a problem again, I am going straight to him. It is that simple. By Kelly
★★★★★
I called Mr. Frankl and his firm about a motorcycle accident case and he helped me through the entire process. Mr. Frankl made me feel like my situation mattered to him and didn't treatment me like just another file in a file cabinet. He is smart, energetic and a true fighter. I am glad to call him my lawyer and I highly recommend Frankl Kominsky for your personal injury case. By A Personal Injury Client
★★★★★
Mr. Frankl was such an asset to have on my team while I picked up the pieces following an accident. Right from the beginning he assisted handling the insurance companies, rental car companies, auto body shops, police reports, it was incredible. His guidance allowed me to focus on the most important thing and that was my medical condition & recovery. Should you find yourself in this unfortunate situation do yourself a favor & trust this man & his expertise. By Damon
View More
Submit a Law Firm Client Review