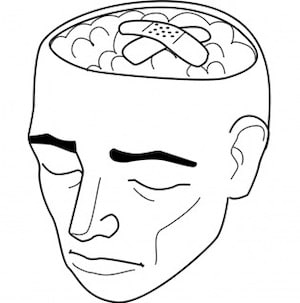 Out of the many different types of accidents that may occur, a brain injury accident can be one of the most devastating. When a brain trauma-related accident happens in Wellington, that individual can suffer a catastrophic injury that can limit their future ability to communicate and create other medical situations that may even lead to an eventual fatality. This type of physical damage, known as a TBI (or “Traumatic Brain Injury”), may be the result of; a motor vehicle accident, a slip and fall accident, a swimming accident or other types of accidents, both ‘severe’ and ‘minor’.

However, one of the greatest problems associated with a TBI is the fact that it isn’t always readily detectable. This may be the case when the initial injury is in the form of as minor skull fracture or a “simple” blow to the skull. Something like this could even occur when one falls off a bicycle without wearing a helmet or they are a passenger in a slow-moving vehicle crash. Because of the possible eventual ramifications of any type of brain trauma, there really is no such thing as a ‘minor’ and a ‘major’ brain injury. They should all be treated equally, yet this is not always the case.

One of the most concerning statistics is that a brain injury accident resulting in serious medical issues occurs in over 1.6 million Americans each year. Out of these incidents, over 65,000 will be the victims of long-term disabilities.

How is an MTBI (Minor Traumatic Brain Injury) Diagnosed?

When certain conditions arise as the result of brain trauma, a diagnosis of MTBI may be given. These conditions include:

Fortunately, the standard prognosis for these types of brain injuries is often encouraging. But it must be taken into account that recovery times will vary and some injured parties may never fully recover.

What are Some of the Specific Brain Trauma Symptoms?

Some of the specific TBI symptoms (physical and cognitive) that are observed include:

There can also be other forms of personality changes along with changes in appetite.

Are Head Impact Traumas Always the Cause of Brain Injuries?

There are several myths regarding brain injuries and one of them has to do with the assumption that the individual must have a blow to the head in order to suffer a TBI. But an unexpected result from a study conducted by Michael Freeman, Ph.D and Ezriel Kornel, M.D., F.A.C.S. (as reported in this Press Release) concluded that whiplash is the cause of about 20% of brain injuries that have resulted from motor vehicle accidents. This phenomenon is called a Chiari Malformation. In this situation, there is a small part of the patient’s brain that has protruded through the base of the person’s skull, when whiplash occurred. This resulted when the brain was slammed back and forth inside the walls of the skull during the whiplash event. Another hard-to-detect brain trauma can arise from diffuse axonal injuries.

These types of “hidden” brain trauma injuries have often eluded the notice of physicians and even brain injury accident attorneys. Part of the reason for this has to do with the fact that these injuries can occur in very low impact vehicle accidents in which the person hasn’t become unconscious or a head impact hasn’t occurred. Therefore, the event might be dismissed as a “minor accident”. This is the primary reason that any suspected neck and head injury should be checked out by a qualified TBI physician.

What are Some of the Myths Associated with Brain Trauma Recovery?

When it comes to medical technology, it can easily be said that major advantages have occurred over the last few decades. This has made it far easier to detect some injuries that used to go unnoticed. Examples of this can include microscopic neuron and lesion damage to the brain that were previously undetectable using an MRI. This is why it’s important for a brain injury accident attorney to point out the fallacy that an insurance company may claim when stating that MRIs are “infallible” when it comes to brain damage detection. An experienced neurologist can make their analysis utilizing other factors that may be present. Cognitive and functional impairment may be shown in cases in which the MRI was negative.

It is possible that the insurance company or attorney for the liable party may try to claim that a TBI patient will soon make a full recovery. This argument is presented in order to downplay the seriousness of the trauma. However, there are some TBI-related issues that are more subtle than others. For example, memory loss may persist, which could prevent someone from returning to their job. This can equate to a serious loss of income. In some cases, TBI-related injuries may be permanent. It has been concluded that:

“At one year after injury, 10-15% of mild TBI patients have not recovered. Many are more symptomatic than even immediately after the injury. Some have had persistence of one particularly troubling symptom usually headache, neck pain or dizziness. Most have persistence and even worsening of the entire symptom complex. Both groups are at a high risk of permanent symptomatic persistent post-concussive syndrome.”

What are Concussive Brain Injuries (Concussions)?

For traumatic brain injuries, the most common type is known as a “concussion”. These can result when the head has been shaken violently or there has been a blow to the head. Post-concussion syndrome is the usual result of this type of injury. It can be a profoundly serious disorder, which may last for a period of months or even, in some cases, over a year. Amazingly enough, even with its potential ramifications, a concussion is known as a “mild” traumatic brain injury (MTBI)!

The symptoms of a concussion can include:

As you can see, a concussion isn’t something that should be taken lightly or totally ignored. This is an injury that requires medical attention as soon as possible. Not being able to access one’s normal brain functionality is something that will echo throughout your entire life.

Another serious issue can come about when a person has received an additional concussion before the initial concussion has had time to heal. This is called a “second impact syndrome” (SIS). This type of concussion can be seen in certain sports-related activities. It may not matter just how severe the second concussion is – it will still have severe physical and cognitive detriment and can often lead to death.

There are other types of brain trauma such as:

What can I do if I Have Suffered a Brain Injury Accident? Contact a Personal Injury Attorney Who can Potentially Protect Your Rights

As with any personal injury, your primary concern is to get the proper medical care. This is more important than being concerned over medical expenses, which can be dealt with at a later time. After you have arranged for medical care, you will want to keep all copies of your medical reports and medical bills in a single location, at home. A personal journal regarding any issues when in recovery can also be valuable. You will then want to arrange for a free initial consultation with a brain trauma personal injury attorney in order to determine your options.

In situations in which a brain injury accident has occurred, it may be possible to hold the other party either partly or fully responsible for the injury and subsequent expenses. That’s because the majority of these situations are based on negligence. Negligence involves the failure to use reasonable care, which in turn, caused the accident that led to the injury. This involves the following situations:

An example of this would be if a motorist has failed to follow the mandated Wellington speed laws and, as a result, has crashed into your car. This constitutes a situation that is covered by Florida Statute 316.183. In this case, the driver, who was speeding, has performed a breach of their duty of care. Your attorney will then show that the results of this breach were injuries, loss of income, etc. that you have suffered, which cannot be fully covered by your insurance.

But, in the case of a brain injury accident, there may be expenses that are generally not covered by medical insurance. These may include items such as psychological trauma and loss of consortium. There are other types of losses to consider such as the death of a loved one or the loss of the quality of life as a result of brain injury-related personality changes.

You should also take into consideration the statute of limitations for filing a lawsuit. For a personal injury lawsuit, you will have 4 years, from the time of the accident (with only a few, rare exceptions). For a wrongful death lawsuit, it will be just 2 years.

Deaths and injuries from a brain injury accident can be the result of catastrophic car crashes and other types of accidents which may occur in Wellington at any given time. In addition, it’s important to understand that while major, devastating accidents are often a factor, there are also many times when this isn’t the situation. There have been a number of cases in which a relatively minor accident has resulted in a brain injury that eventually led to a person’s death.

Discuss your case with a Brain Accident Personal Injury Attorney Serving Wellington Today! Turn to Frankl Kominsky for comprehensive legal guidance. Call (561) 800-8000 or use our Contact Form to set up a free consultation.