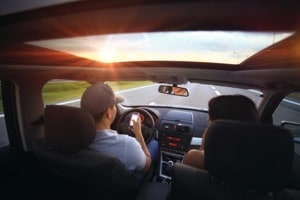 Driving in one’s car is a situation that most of us don’t really consider to be a special event. That’s because we have been conditioned to think of driving as the same as walking to the corner grocery store or walking to a neighbor’s house. But the reality is quite different. When driving, you are getting into a large machine that is propelled by highly flammable liquid fumes and can create massive destruction at any given moment. See the difference? Since this machine is more or less completely at your command, it’s a good idea to pay strict attention to what you’re telling it to do. Right? However, texting and driving injury lawyers can tell you that there are many individuals who believe that they can effectively perform other tasks when driving a motor vehicle.

When discussing “distracted driving” we are referring to anything that will draw one’s attention from their driving and concentration on the road ahead of them. These situations can include:

But one of the most common (and dangerous) tasks that drivers engage in involve texting while driving.

How Dangerous is Texting and Driving at the Same Time?

Since we live in the era of “communication”, you will find many people that are literally “connected” to their portable phones. This has become so common place that there is now a need to feel as if one is connected throughout the entire day. This feeling has elevated the role of the cell phone in our society. In many cases, operating a cell phone has overcome the understanding of the need to pay attention when driving. And it’s obvious that if you’re using your eyes to look at a cell phone, then you’re not using them to watch the road.

Here are some of the facts that people rarely consider when they’re not even using their cell phone:

Even if your driving has your complete attention, if you’re travelling at 60 miles per hour, it can take you over four and a half seconds in order to stop. During that stopping time, your car will have travelled about 270 feet. Now add to this, the additional time that is attached to texting prior to hitting the brake. Do you think you could stop exactly when you need to?

When considering Lake Worth and the rest of the state, there were over 45,000 driving accidents in 2016, which were caused by distracted driving circumstances. These accidents presented many unfortunate cases that texting and driving injury lawyers had to face. Here, we’re looking at a fatality rate of about one person for each day of that year! But there are those who still argue the case for voice-texting phone applications without having read the research.

To address this fallacy, additional research was performed by a researcher named Christine Yager at the Texas A&M Transportation Institute. These were her findings:

What are the Distracted Driving Statistics and Regulations in Florida?

Recently, a new cell phone use while driving law went into effect. Some of the reasons for this had to do with the fact that Florida was designated as the 2nd most “distracted when driving” state (Louisiana was #1)! This was in 2017 and determined from the results recorded by the EverDrive motion-sensing app.

The EverDrive application’s function is to detect and record; hard turning, aggressive acceleration and braking along with speeding and other driver actions while texting and driving. The application then turns off when the phones are in sleep mode.

What are Florida’s Laws on Texting and Driving?

Due to the work of those who have pushed for more strict laws concerning cell phone use when driving, a new bill was introduced and approved by Governor Ron DeSantis on 5/17/2019. This was known as the CS/HB 107: Wireless Communications While Driving bill.

In addition, there are exceptions to the ban presented by the new law. This includes an allowance for those who are using cell phones in which messages are related to emergency situations. An example of this can include hurricane warnings and conditions.

There initially was a ban on texting while driving in Lake Worth and the rest of the State. But it was designed so that the police were not allowed to pull a driver over just for texting and driving (a primary offense). Some other driving offense was needed in order to do that. Because of this, 2018 had less than 1,700 tickets issues for driving while texting.

What Should I do When My Vehicle is Hit by a Distracted Driver?

Confusion and instant stress abound anytime one is involved in a car crash. In a case in which you have not been seriously hurt, there are some steps that you may want to take. First of all, gather your wits as much as possible and begin checking to see if anyone is injured. Then, you’ll want to immediately contact 911 for police and emergency medical services . Also, make sure the vehicles aren’t blocking the roadway. This might cause another accident.

Also, you will want to have a police report generated, even if you don’t see any damage to your vehicle. You’ll also want to take the opportunity to exchange driver information and provide that information to the police officer who is investigating the accident.

Any other information can be found in the police officer’s report at a later time. For example; the other motorist’s name, insurance info, their contact info, make and model of their vehicle, their driver’s license number and license plate number.

Other steps and options:

What is the Statute of Limitations Regarding a Florida Distracted Driving Accident?

Generally, the statute of limitations for filing a lawsuit in Florida for a distracted driving accident is four years from the date of the incident. However, in the case of a wrongful death lawsuit, a close relative or estate has just two years to file.

Careless driving decisions can result in catastrophic accidents which can cause serious injuries and even death. In addition, it’s important to understand that while high vehicle speeds are often a factor, there are also many times when this isn’t the situation. There have been a number of cases in which a very low speed car crash has resulted in an injury that eventually led to a person’s death. The injuries involved may include brain damage and various internal organ injuries. Therefore, even if you are involved in a “minor” car crash that has occurred, it is advised that you seek medical care and the advice of a distracted driving accident personal injury attorney.

Therefore, when you or a loved one are involved in a Lake Worth distracted driving accident, contact a Florida personal injury attorney.

Discuss your case with a Distracted Driving Accident Personal Injury Attorney Serving Lake Worth Today! Turn to Frankl Kominsky for comprehensive legal guidance. Call (561) 800-8000 or use our Contact Form to set up a free consultation.