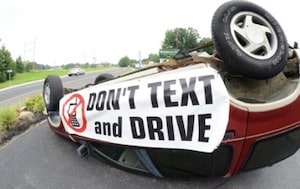 People tend to take driving in their cars for granted. Unfortunately, drivers rarely keep in mind that they happen to be in a large piece of machinery that can move faster than a mile a minute. This propelled piece of metal should, in essence, command one’s strict attention at all times. However, this fact can escape those who feel that they can operate a potentially devastating piece of machinery while performing other tasks. Because of this, Florida personal injury lawyers in Palm Beach encounter many cases in which car crashes have resulted from a driver who was distracted.

When we talk about distracted driving, we are referring anything that can cause a driver to remove their attention from the operation of their vehicle. These include:

However, one of the most prevalent issues when considering distracted driving accidents revolves around texting and driving.

In today’s society people are sometimes literally attached to their cell phones. Whether for business or pleasure purposes, cell phones have created a population of those who feel the need to be constantly connected. As such, communicating on a cell phone has established itself as a high ranking priority in the lives of many individuals. So much so, that it can actually override the much-needed awareness that driving requires. But let’s face the facts; if you’re texting while you’re driving, you are not looking directly at the road you’re driving on.

But let’s put down the phone for a minute and say that you are focused on your driving. Consider the fact that even when focused on driving, a vehicle that is moving at 60 mph may take over 4.5 seconds to come to a complete stop. During that time, it can cover a distance of approximately 271 feet. Now suppose you were also distracted by texting on your phone. What are your chances of stopping on time should you suddenly need to?

In any case, Florida distracted driving crashes numbered more than 45,000, in 2016. This equated to a fatality rate of nearly one person daily. But what about those who argue that voice-text applications are safer to use, rather than manually entering text?

In addition, the Insurance Institute for Highway Safety has contended that talking on cell phones has accounted for four times the increase in chances for auto accidents. This contributed to the increasing number of distracted driving cases for Florida personal injury lawyers.

Did you know that Florida has actually been designated as the second most state in the U.S. when it comes to distracted driving – just behind Louisiana? This finding came about in 2017, when nationwide drivers were scored on the data that was obtained from EverDrive motion-sensing app. This application is designed to detect; hard braking, aggressive turning, sudden acceleration, speeding and other vehicle movement when the driver’s cell phone is in use. The application is inactive when the phones are in hands-free or sleep modes. The overall finding indicated Florida’s second place ranking in accordance with the study’s point system.

Florida personal injury lawyers can tell you that, in 2018, Florida was only one of five states in which texting on a cell phone, while operating a motor vehicle, is prohibited but it’s only a secondary and not a primary offense. Because of this, police could not pull over a driver for texting, unless a different, primary offense has been committed. Examples of a primary offense would be running a red light or speeding. But all of this is about to change.

Florida Gets Tough on Texting and Driving

In 2018, a measure (SB 76) was filed by Senator Sen. Wilton Simpson, R-Trilby that is known as the “Florida Ban on Wireless Communications Devices While Driving Law”. This would place a ban on Florida drivers when it comes to texting, reading data or talking on handheld wireless devices when operating a motor vehicle.

But during the House 2018 legislative session, the measure failed to advance. However, a new proposal for the House 2019 session allowed for a different set of circumstances. These include an allowance for hands-free wireless devices to be used by drivers for standard communication (with certain restrictions) and for the purposes of obtaining safety-related information.

Due to the diligence of those who have pushed for a more stringent law concerning cell phone use while driving, a bill was introduced and approved by Governor Ron DeSantis on 5/17/2019. This is known as the CS/HB 107: Wireless Communications While Driving bill. This bill is aimed at toughening Florida’s original ban on texting while driving by making it a primary offense as opposed to a secondary offense. This stipulation is scheduled to go into effect on July 1, 2019. At that time, Florida police will have the authority to pull over someone who is texting while driving, with some limited exceptions. However, drivers will still be permitted to use their cell phones when their vehicle is not in motion.

It should be noted that it has been illegal to text while driving in Florida for years. However, the police were not allowed to pull you over for it. As a result, less than 1,700 texting while driving tickets were issues in 2018. This was usually the result of being pulled over for a different, primary, offense. It is now hoped that refraining from texting while driving will be seen as commonplace as using seatbelts.

Under the new law, Florida drivers will still be allowed to utilize their cell phones and check messages related to emergencies, such as weather forecast warnings. However, there is an exception that pertains to work zones and school zones in which a driver may not use their cell phone (with the exception of emergencies). While that particular provision begins on October 1st, until then police are limited to only stopping an offending driver and issue them a warning. Then, beginning on January 1st, 2020, police may issue tickets for school and work zone offenses.

There are still some claims that the penalties attached to this new law are not strict enough. For example, the first offense only entails a $30 fine (plus court fees). A second offense can result in a $60 fine (plus court fees) and 3 points on the driver’s record. However, cell phone texting in a work or school zone can result in points on the first offense in addition to the fine.

There is also a civil rights concern regarding the new law that, in the past, had kept similar texting restriction bills from passing. This can be seen in the new law’s additional provisions, Namely, the police are required to record the ticketed driver’s race and ethnicity. This information is then sent to the state. This is said to determine if the new law is being enforced unevenly as a result of racial profiling.

It has also been pointed out that the police can find it difficult to determine if the driver was actually texting, as opposed to using an app that is designed for navigation purposes. Since there is a concern regarding the police using the stop for the purposes of searching a cell phone, it is required that police must tell a stopped driver that they have a legal right to decline a cell phone search.

While there are some concerns regarding the new law, many are optimistic that the new provisions will go a long way in order to help cut down on the number of texting and driving accidents in the state of Florida.

What Should I do if I Get Hit by a Distracted Driver?

A car accident can be the instant cause of stress and confusion. If you haven’t been seriously injured, it’s important to gather your wits and take certain steps. The first thing that you will want to do, after checking to see if everyone is alright, is to stay put and contact the police. Even if there doesn’t seem to be any damage to the vehicle, a sudden, unforeseen stop can be the cause of a personal injury manifesting in the future. In any case, you may want to have a police report created – especially in cases in which you feel that the other driver was at fault.

While waiting for the authorities, you will also want to ensure the safety of the other drivers on the road. Depending on the amount of damage involved, you will want to move the vehicles off to the side of the road or set up road flares or some sort of emergency lighting.

Other steps that you can take:

When you have been involved in a Palm Beach texting and driving accident, it’s important to consult with a personal injury attorney, in order to try to receive the best care and compensation that you rightfully deserve. Therefore, when you are involved in a Palm Beach car accident, seek immediate medical care and contact a Florida personal injury lawyer.

Discuss Your Case with a Car Accident Personal Injury Attorney Serving Palm Beach Today! If you were injured in a car accident in Palm Beach, turn to Frankl Kominsky for comprehensive legal guidance. Call (561) 800-8000 or use our Contact Form to set up a free consultation.