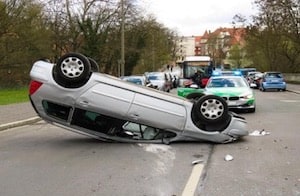 A hit and run accident is an accident in which a driver, who was involved in the accident, has left the accident scene prior to the arrival of law enforcement authorities. In addition to this act, the driver did not perform the “statutory accident duties” that are required in vehicle accident cases. In other words, a driver got into an accident and immediately fled the scene. In Delray Beach, these types of accidents have commonly involved; serious injuries to the remaining driver, property damage and fatalities.

What are Considered the Property Damage Statutory Duties in a Delray Beach Accident?

The property damage statutory duties in Delray Beach are the same as they are throughout the state of Florida. In the event of property damage resulting from a vehicular accident, the driver’s obligations are outlined in the Florida statutes listed in 316.061-316.063. These include:

What are the Florida Statutes Governing a Vehicle Accident That Has Resulted in an Injury or Fatality?

In a case in which a vehicle accident has resulted in an injury or fatality, the Delray Beach statutes are the same as the rest of the state of Florida (Sections 316.062 and 316.027, Florida Statutes) and specify:

What Types of Injuries can Result in a Hit and Run Accident?

The injuries may from a hit and run motor vehicle accident may include:

But when it comes to a hit and run accident, there’s more to it. Since the other driver has fled the scene, the injured party may be unable to get the immediate medical attention that they require. There is also the possibility that law enforcement authorities may not be immediately contacted either. This situation can end up making matters worse in regards to the severity of the victim’s injuries and may even lead to a fatality.

This is the reason why the state has placed certain statutes regarding accidents and the need to remain at the scene of an accident. This will ensure that the injured parties receive the immediate medical treatment that they need and restitution can be made regarding damaged property. If the party responsible for the damage should remain anonymous, then there is a good chance that these things may not occur.

How can You Prove That a Hit and Run Accident Has Been Committed in Delray Beach?

In Delray Beach hit and run accidents, one must prove four things that are included in the statutes:

What are the Penalties for Leaving the Scene of a Delray Beach Accident?

When it comes to a hit and run accident in Delray Beach, the penalties that are assessed will, of course, depend on the severity of the circumstances and the damages that have resulted. In some cases, the penalties may be stipulated by the actual statutes or they can be assessed in a court trial by a judge or a judge and jury. If the hit and run case merely involves property damage (and not injury or fatality), then it is usually classified as a 2nd degree felony.

Can One Obtain Restitution for a Hit-and-Run Accident in Delray Beach?

Restitution may be obtained in a criminal case against the defendant. That case would state that the victim suffered damages through the conduct of the defendant (directly or indirectly) that caused the accident in the first place.

A precedence for this may be seen in; Glaubius v. State, 688 So. 2d 913, 915 (Fla. 1997). Of course, the action of “leaving the scene of the accident” is not something that you would have expected to actually cause an injury. So, the court would have to determine if there were any damages to have resulted from the accident whether or not the defendant had stayed or left the accident scene. Because of this, there have been numerous instances in which the victim of a hit and run accident hasn’t received restitution by a state appellate court because the sole charge was “leaving the scene of an accident”. (Fykes v. State, 599 So. 2d 268 (Fla. 1st DCA 1992)

But, if it can be proven that the action of leaving the scene of an accident can be linked to an exacerbation of the victim’s personal injuries (ex.- no immediate care was given), then restitution may be granted.

Are There any Valid Defenses That can be Used for a Delray Beach “Leaving the Scene of the Accident” Charge?

The defenses can include:

There are also cases in which a defense attorney has spoken to the prosecution and arranged for restitution in exchange for dropping a hit and run accident charge.

Discuss your case with a Hit and Run Accident Personal Injury Attorney Serving Delray Beach Today! Turn to Frankl Kominsky for comprehensive legal guidance. Call (561) 800-8000 or use our Contact Form to set up a free consultation.