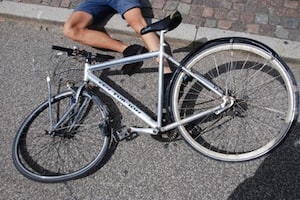 It can be said that in these days, a much greater focus has been given to the advantages of creating a healthier lifestyle. This includes a rise in the number of individuals that can be seen out for a morning jog or purchasing low fat food products. In addition, there has been a greater interest in using less oil and petroleum products as a means of taking better care of the environment. When you combine these two interests, you’ll see the reasons why bicycle riding has increased in popularity. However, with increased bicycle riding, you also have an increase in bike accident injuries.

While the increase in bike accidents is a notable phenomenon, it should also be noted that a great many of these types of accidents are due to negligence. As such, many are completely avoidable. If you’ve been involved in a bicycle accident that has resulted in a personal injury, then it may be beneficial to speak with a Royal Palm Beach bike accident personal injury attorney.

What are the statistics when it comes to bicycle accidents?

Royal Palm Beach (along with the rest of the state) is noted for its pleasant weather and a greater amount of sunshine, when compared to the rest of the country. Because of this, it can be easily seen why there are many individuals (both tourists and residents alike) who choose to ride bicycles as an alternate means of local transportation, as well as a recreational activity. Because of this, in 2015, Florida had the greatest number of bike accident fatalities.

But it should also be noted that these horrendous statistics don’t illustrate the number of bicycle accident injuries that are non-fatal. Some of these have resulted in injuries that will affect the riders for the remainder of their lives. With this, comes tragedies such as; loss of income, physical debilitation and other issues that require a certain amount of compensation in order to assist the victim and their families.

These types of non-fatal injuries have been recorded at more than 20,000 in the years from 2008 to 2012. These injuries speak to the need for training when it comes to safe bike-riding procedures that are designed to avoid accidents and their subsequent injuries. However, even though this type of training is available and extensively taught, we still see a large number of bike accidents. In addition, these accidents have been shown to be the result of carelessness bicycle riding as well as careless practices from motorists.

What are the bike riding helmet laws in Royal Palm Beach?

It’s pretty obvious that anyone who is on a bicycle should be wearing a helmet as a means for greater safety. Yet, the helmet-wearing laws in Royal Palm Beach specifically point out who is required, by law, to wear a bicycle helmet. Here, we see:

“A bicycle rider or passenger who is under 16 years of age must wear a bicycle helmet that is properly fitted and is fastened securely upon the passenger’s head by a strap and that meets the federal safety standard for bicycle helmets.” (Statute 316.2065 (d)).

This statute also mandates that persons under the age of 16 are required to wear a bicycle helmet when riding in a trailer that is being towed by a bicycle or a bicycle-drawn sidecar.

There are also federal regulations when it comes to specifying the standards for wearing bike helmets. These regulations are listed in the Code of Federal Regulation for January 1, 2016. Here, see that a bike rider who possesses a helmet that doesn’t meet current federal regulations (established in 2016), will need to obtain a new bicycle helmet that does. If the rider doesn’t comply with the regulation, a citation could be issued. However, there are also cases in which the citation might be waived, provided the individual obtains a new helmet and can present the proof-of-purchase receipt to the court. Because of this, it can be obvious that the goal of the citations is to place an emphasis on greater bike riding safety, rather than punishing the rider. This situation can be observed in the statute:

“The court shall dismiss the charge against a bicycle rider or passenger for a first violation of paragraph (d) upon proof of purchase of a bicycle helmet that complies with this subsection.” (Statute 316.2065 (e))

In addition, parental consent, when it comes to a young rider not wearing an approved helmet, isn’t considered an excuse. See: (Statute 316.2065 (8))

Does a Royal Palm Beach bicycle accident require me to file a claim through my auto insurance?

In Royal Palm Beach, there is a no-fault provision when it comes to vehicular accidents. This is illustrated in a PIP law (personal injury protection), which presents a no-fault claim. Because of this, if you have a bicycle accident, then you would need to file a PIP claim through the auto insurance policy that you possess.

What can I do if I don’t possess an auto insurance policy?

Of course, there are a number of people who utilize bicycles as an alternate form of transportation. Because of this, it can be possible that such an individual may not own a car and, therefore, don’t have an auto insurance policy. Here, it’s important to know what options can be available in this situation.

If you were injured in a bicycle accident, you can pursue a claim with the party that was responsible under the theory of negligence.

Who possesses the right of way when it comes to bicycles in Royal Palm Beach?

According to the statute affecting Royal Palm Beach, “Every person propelling a vehicle by human power has all of the rights and all of the duties applicable to the driver of any other vehicle…” (except when special regulations apply). (Statute 316 2065 (1)). This indicates that, by law, a bicycle is considered to be an actual “vehicle”. Because of this, bike riders need to adhere to the same laws that apply to motorists. The only notable exception is that a bicyclist is allowed to ride on a Royal Palm Beach sidewalk and crosswalk (with certain restrictions). (Statute 316.2065 (7)) So, unlike some folks tend to believe, the law associates no “moral high ground” to cyclists even though bicycle-activists like to maintain that bike riders should be given greater consideration as opposed to motorists.

What are some of the most common causes of bike- riding accidents?

Some of the most common types of bicycle-riding accidents include:

What are some of the things to remember, when involved in a Royal Palm Beach bicycle accident?

When you have become involved in a Royal Palm Beach bicycle accident, there are some things that you should do. These include:

Immediately go to see a doctor or visit a local hospital – Even in situations in which you don’t feel as though you’ve suffered any injuries, you should be checked out by a doctor as soon as possible. That’s because, like motor vehicle accidents, there are many types of injuries that don’t show their symptoms until much later after the accident. This is especially true when it comes to head and neck injury. In addition, your PIP coverage may not extend to cover injuries for those who have waited over a 14-day period in order to visit a doctor for an evaluation.

File an accident claim – This can be extremely important in cases that involve a hit-and-run cyclist accident. Proceed to your local police station to report the accident and receive a police report.

Avoid conversations with insurance representatives representing the other party – It’s generally true that insurance companies do whatever they can in order to avoid paying for accident occurrences. So, avoid handing out any information that they might be able to use against you. Also, never take any compensation from them unless you have first spoken to your own attorney.

With the assistance of a Royal Palm Beach bicycle accident attorney, you may be able to receive compensation for both your economic and non-economic damages that can include:

Deaths and injuries from careless riding decisions can be the result of catastrophic bike accidents, which may occur in Royal Palm Beach at any given time. In addition, it’s important to understand that while high vehicle speeds are often a factor, there are also many times when this isn’t the situation. There have been a number of cases in which a very low speed motorist/bike accident has resulted in severe injuries. If you are involved in a bike crash, it is advised that you seek medical care and the advice of a bicycle accident personal injury attorney.

If you or a loved one are injured in a Royal Palm Beach bike accident, contact a Florida personal injury attorney. Discuss your case with a Bike Accident Personal Injury Attorney Serving Royal Palm Beach Today! Turn to Frankl Kominsky for comprehensive legal guidance. Call 561-800-8000 or use our Contact Form to set up a free consultation.