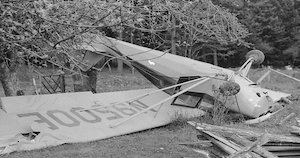 When it comes to transportation-related accidents, an airplane accident can be one of the most devastating. Fortunately, airplane travel is relatively safe when its compared to other forms of transportation. However, they can also result in serious injuries and at times, fatalities. Moreover, they can also result in millions of dollars in massive property damage. If, as a resident of North Palm Beach, you have become involved in an aviation-related accident, it can be imperative that you contact an experienced airplane accident personal injury lawyer as soon as possible.

Some of the Common Causes of Airplane Accidents

In most cases, the causes of airplane accidents are related to pilot errors, improper maintenance of the aircraft or defective aircraft parts. In some cases, it can be a combination. This can occur when there is an aircraft parts failure that is incorrectly handled by the pilot and/or navigator. Some of the more common causes of aircraft-related injuries may include:

These situations (or a combination of situations) can result in an airplane accident or incident. An experienced airplane accident lawyer can have the ability to trace the exact cause(s) of the aircraft failure and determine who is subsequently at fault. At that point, damages may be sought from those who are responsible. Fortunately, Florida has laws that govern aircraft operation and maintenance in order to provide for the safety of those who are flying.

When it comes to an airplane accident or incident, personal aircraft flights can often be more dangerous. That’s because commercial airline piolits are required to have a significant amount of training and experience. They also tend to fly on a regular basis, which allows them to keep their flying skills up to date. However, when it comes to pilots that fly for personal recreation, they tend to fly far more infrequently. This can cause them to lose some of their skills in between their flying trips.

Those who have been involved in small plane flying accidents are generally the friends and family of those who are flying the aircraft. Should this be the case in your airplane accident, you shouldn’t let that dissuade you from making a claim and filing a lawsuit. Generally, the claims are against insurance carriers. In addition, that damages that you may recover could be essential when it comes to paying for medical bills, loss of income and possibly burial expenses.

If the situation involves pilot error in a commercial flight, then you may have a claim against the commercial airline that hired the pilot. It is the company’s responsibility to provide proper training, supervision and establishing hiring procedures. If there was negligence when it comes to these practices, then the commercial airline may be held responsible. Pilots are licensed by the Federal Aviation Administration, which keeps records of certification and licensure. In addition, a pilot must be in possession of their license and are required to allow its inspection on demand (Title XXV, Chapter 330.04). They also require that pilots to undergo physical examinations on a regular basis. This is done to ensure that a pilot has not developed a medical condition that has subsequently rendered them unfit for flying.

Another of the more common causes of an airplane accident or incident relates to aircraft mechanical difficulties. It’s even possible that an airplane may be defectively designed. Therefore, even if the plane is built in order to its design and can be properly flown with sufficient care, certain design flaws can eventually manifest themselves and suddenly cause a serious plane malfunction. In addition, there can also be manufacturing errors that may include improperly assembled or parts that were not correctly produced. Should you be involved in a helicopter or airplane accident or incident, that was the result of a mechanical issue then you may be able to file a liability claim against the aircraft manufacturer or even the designer of the aircraft or the aircraft’s associated equipment.

An example of the statutes that govern aircraft parts and parts installation would be in regards to aircraft fuel tanks (Title XXV, Chapter 330. 40), Here, it is stated that “In the interests of the public welfare, it is unlawful for any person, firm, corporation, or association to install, maintain, or possess any aircraft which has been equipped with, or had installed in its wings or fuselage, fuel tanks, bladders, drums, or other containers which will hold fuel if such fuel tanks, bladders, drums, or other containers do not conform to federal aviation regulations or have not been approved by the Federal Aviation Administration by inspection or special permit.”

There are also issues that are associated with aircraft maintenance negligence. These problems may be associated with the companies or personal owners of aircraft who do not conduct regularly scheduled maintenance and inspections. It can also include a situation in which aircraft mechanics fail to properly repair aircraft. In addition, it is a pilot’s responsibility when it comes to making a pre-flight inspection of the aircraft prior to takeoff. Any of these failures may lead to a negligence claim if it is proven that the failure was integral to the cause of the aircraft accident and subsequent injury.

The National Transportation Safety Board

When there has been a civil action regarding aircraft accidents in Florida, or anywhere else in the U.S., the NTSP (National Transportation Safety Board) will conduct an investigation regarding the situation that likely caused the accident. In addition, it will also perform an investigation of aircraft accidents that occurred in other countries, if the aircraft had parts that were manufactured in the United States or if the aircraft is registered in the U.S. As such, the NTSP will generally end up investigating about 2,000 aircraft incidents each year. They will then file a report that will also provide its recommendations regarding future safety precautions.

What Should I Do If I’m Involved in an Aircraft Accident?

While being involved in an aircraft accident is a seriously traumatic occurrence and you may be seriously injured, there are instances in which you may be able to walk away with injuries that are not immediately life-threatening. Or you may be the survivor of a family member who has suffered a fatality or has been seriously injured. In any case, if you are able, these are the suggestions that you might want to follow:

The Investigation of Your Airplane Accident or Incident

You should also remember that not all aircraft accidents and incidents involve an aircraft crash. For example, improper aircraft maintenance can be the cause of a slip and fall accident on board an aircraft. Also, an unexpected turbulence incident may cause a fall, while you are out of your seat force you to hit other passengers, stationary objects or carry-on luggage. The injuries that result from these types of accidents can also create medical expenses and loss income situations.

When it comes to a successful litigation of an airplane accident or incident, a good legal team will try to perform a detailed investigation which will determine the exact cause of the accident and thus determine where the liability is to be assigned. On larger commercial aircraft, there are “black boxes” that can be used in order to determine what has actually occurred on an aircraft and may be invaluable as to the sequence of events that led up to the accident. But, when it comes to smaller, private aircraft, the determination of the causes of an accident can be a bit more difficult. In these cases, a thorough aviation investigation may possibly take more time.

Various Florida Statutes That Apply to Aircraft and Aviation

Some of the statutes that pertain to Florida aviation regulation include:

Of course, the majority of aircraft laws are governed under Federal Aviation Regulations.

If serious injury or a fatality has been the result of an airplane accident or incident, as a North Palm Beach resident you may be obtain several types of compensation for those expenses and financial losses that you have sustained. In addition to personal injury and property damage, you may also obtain compensation for intangible losses that are related to; loss of enjoyment of life, pain and suffering, psychological issues, etc.

For those family members who have been affected by a fatality, a wrongful death suit may be filed. These damages may include; loss of companionship, loss of consortium and financial support. In addition funeral expenses may be recovered.

If, as a North Palm Beach resident, you have been involved in an airplane accident or incident, it’s important to consult with a personal injury attorney, in order to try to receive the best care and compensation that you rightfully deserve. Therefore, when you are involved in an airplane accident or incident, seek immediate medical care and contact a Florida personal injury attorney serving North Palm Beach.

Discuss Your Case with an Airplane Accident or Incident Personal Injury Attorney Serving North Palm Beach Today! If you were injured in an airplane accident or incident in North Palm Beach, turn to Frankl & Kominsky for comprehensive legal guidance. Call (561) 800-8000 or use our Contact Form to set up a free consultation.