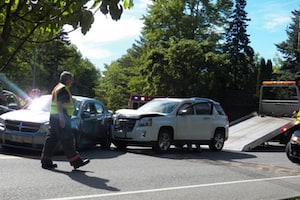 One of the most serious issues that pertain to driving a vehicle these days is the fact that most drivers don’t take it seriously enough. Driving has become so commonplace that it can be viewed by some to be like sitting at the computer or playing a video game. However, when you make a mistake, due to inattention, in a video game, it won’t result in real-world catastrophic consequences. This is the reason why we see so many distracted cell phone car crashes in Jupiter and the surrounding areas in the state. People need to understand that checking your email while driving a car is definitely not the same thing as checking it at home.

Unlike most of the other tasks that one performs throughout the day, it is absolutely imperative that one focuses their absolute attention when it comes to driving. If you have any questions regarding the seriousness of this issue then consider the fact car accidents, due to cell phone distractions, number about 390,000/year, as reported by the National Safety Council. The tragic part is that many of these accidents are completely avoidable if drivers took more care when it comes to focusing on their driving decisions.

Statistics in Florida: Car Accidents Caused by Cell phone use

When it comes to using cell phones while driving, the following statistics have been reported:

How does Texting While Driving Cause Accidents?

Over the years, cell phones have become a part of our everyday lives. Because of this, it’s now pretty common to see a home in which a traditional landline isn’t even installed. This makes sense, since a cell phone can have its software customized to an individual’s specific needs and preferences. In addition, being able to take your phone pretty much wherever you go, can be an incredible convenience. Add to that, a cell phone can perform many other functions, as well. You can use it to take photos and send them to others or watch a movie while waiting for an airline flight. And that’s only the tip of the iceberg. In a number of cases, a cell phone can act as a travelling “office” for business people who are constantly travelling. As a matter of fact, the computing power of a typical cell phone is many times that of the computing power that was used to place a man on the moon, just a few decades ago!

When you consider the functionality of a cell phone, you’re basically looking at a device that can connect you with others who may be a half a world away. However, attempting to be connected with other individuals is definitely not a wise decision when you’re engaged in a task in which becoming distracted could potentially lead to your death!

What are the Jupiter statutes when it comes to cell phone use while driving?

In Jupiter, and the rest of the state, there has been a recent change in the statutes pertaining to driving while using communication devices. Although using cell phones while driving has always been against the law in Jupiter, it was initially designated as a secondary offense. This meant that a police officer was not authorized to pull a driver over for that particular driving infraction. In order to do that, the driver would have had to also perform a primary driving infraction, such as driving past a stop sign without stopping. This has since changed.

The new statutes that have been put into place now make it a primary offense when it comes to using a cell phone while driving, under most circumstances. So now, police may pull over a person who is texting while driving and issue a citation. This new statute (Statute 316.305) has been implemented to both stop cell phone use while driving and to bring more awareness to the situation. The statute’s provisions state:

Other aspects of the new law have been designed to prohibit cell phones (and other electronic device) communication when one is driving in a designated school or work zone, to include designated school crossings. This statute went into effect on July 1, 2019, with the school and work zone provisions set up to be in effect on October 1, 2019. There has also been an “education period” set up in which the police will only be authorized to give out warnings until January 1st, 2020. At that point, police would then be authorized to issue tickets.

What to do if you were in an accident caused by Distracted Driving?

As in any other type of accident with potential injuries, you will want to first take a moment in order to gather your wits and then evaluate the situation. If there are any injuries, you will want to first see to those and call 911. You will also want to ensure that medical transportation is also contacted, as well as police authorities. You should also try to make sure that vehicles and people are not blocking the road, which could result in another accident. If you have road flares, use those as well.

Next, you will also want to get with the driver of the other vehicle and exchange the standard information (name, license info, address, insurance info, etc.). When the police arrive, you should answer any questions that they have for you. If you can, take a number of photos of the accident scene to include; vehicle damage, surrounding road conditions, injuries, etc. But stay out of the way of the investigating officer. You should also contact your insurance company.

It is also extremely important to make an immediate trip to the hospital, or your own doctor for a complete checkup. When it comes to car accidents, there are many types of injuries, such as whiplash, that won’t show up until a day or two after the crash. You also want to set a follow up appointment in order to see if any other injuries have become apparent. Get a copy of all bills and medical evaluations and keep them in a separate file at your home.

Afterwards, you may wish to contact an experienced automobile accident attorney in order to get advice on what your options are. The initial appointment is free, so it is strongly advised that you make use of this advantage.

You may also run into a situation in which the other party’s insurance company will try to get in contact with you. This is especially true in cases in which the other party was the cause of the accident. They may even offer you a settlement that they say is extremely generous and is time sensitive. Under no circumstances should you speak with them, sign anything or accept any offers.

The reason for this has to do with the fact that insurance companies are experts at paying out the least amount of money possible for an accident. Their offer most likely will not take certain things into consideration such as; lost wages, potential future medical expenses and other costs that may become involved due to the accident. This is why it can be important to speak with your own attorney before accepting any offers.

Deaths and injuries from a hit and run Florida car accident can be the result of reckless behavior, which may occur in Jupiter at any given time. In addition, it’s important to understand that while high speeds are often a factor, there are also many times when this isn’t the situation. There have been a number of cases in which a very low speed car crash has resulted in an injury that eventually led to a person’s death. Therefore, if you or a loved one has been injured in a car accident resulting from cell phone distraction, it is advised that you seek medical care and the advice of a car accident personal injury attorney.

Discuss your case with an experienced Car Accident & Injury Attorney Serving Jupiter Today! Turn to Frankl Kominsky for comprehensive legal guidance. Call 561-800-8000 or use our Contact Form to set up a free consultation.