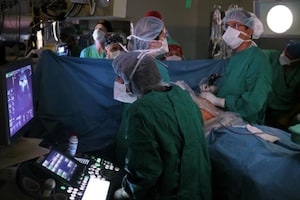 Healthcare can elicit many different emotions from the general population. However, when considering medical malpractice surgical errors, we find that this situation can elicit the greatest amount of alarm.

When we are about to have a surgical procedure, we are in a position in which we have placed our greatest trust in the doctor who will be performing that operation. This is also true when it comes to the members of their staff who will be assisting in the surgery. Our assumptions are based on the fact that the doctor and team represent a number of years dedicated to performing their medical care to the highest possible standard. While we may accept that there is always the chance that something may go wrong, the last thing we expect is for a problem to arise due to negligence from the surgical team. But the fact remains, medical malpractice surgical errors in Palm Beach occur far more frequently than most people would like to think.

It should be said, though, that this in no way indicates that there should be an assumption that the professionals in the medical field are unqualified to perform surgery. The truth is that the medical profession consists of a large number of highly skilled professionals that make up the overwhelming percentage of its members. However, there are also cases in which an error in judgment is made, that could have been completely avoidable and that error had resulted in serious consequences for the patient.

If you, or a loved one, are suffering from the effects of an avoidable error in a surgical procedure, then it is recommended that you immediately seek the advice of an experienced medical malpractice attorney, serving Palm Beach. The initial consultation is free of charge and an experienced attorney can try to assist you in determining what your options are.

How Do I Know if I Have a Case?

It goes without saying that each situation has its own set of circumstances when it comes to evaluating a legal position. But there are also an accepted set of medical guidelines that are utilized in order to determine if whether or not medical malpractice has occurred. These guidelines include:

Situations in which no surgical malpractice is involved

Situations in which surgical malpractice was involved

What are some common surgical errors that can be made?

Here are some of the most common surgical errors that can be seen in medical malpractice cases:

What is considered to be the professional standard of care?

Palm Beach statutes allow for a patient to file a lawsuit against; doctors, surgeons and medical team staff members for situations that involve medical malpractice surgical errors. Even so, there may be an occasional dispute when it comes to defining the professional standard of care within the medical industry. Part of the reason for this can be traced to the fact that, in the medical profession, there is no such thing as “perfection”, as defined by state law. This particular situation may surprise a lot of people. In cases that involve a surgical procedure, if something goes wrong, the general immediate reaction is to place the blame on the surgeon and the medical team. But, this wouldn’t be a fair assessment.

In truth, what needs to be shown is that there has been a “breach of care” involved when it comes to the medical team that has performed the operation. This is something that happens when the actions of the surgical team has fallen below the acceptable standards of medical care that are considered to be prudent and competent. When legally attempting to evaluate the standard of care that was given to a surgical patient, the determination is based on: the surgeon’s knowledge, the available medical resources and other factors.

What are the Palm Beach statutes regarding surgical medical malpractice?

There are a number of Palm Beach (and the rest of the state) statutes that pertain to the standards of medical that is considered to be legally acceptable. These include:

What do I need to do after I have experienced a surgical error in Palm Beach?

If you’re the victim of a Palm Beach medical malpractice surgical error, then there a few steps that are recommended for you to take:

Enlist an Experienced Medical Malpractice Attorney to Protect Your Rights

Deaths and injuries from a Palm Beach medical malpractice surgical error can be the result of negligent behavior, which may occur in Palm Beach at any given time. In addition, it’s important to understand that while normal surgical risks are often a factor, there are also many times when this isn’t the situation. There have been a number of cases in which negligent practices have resulted in an injury that eventually led to a person’s death. Therefore, if you or a loved one are injured in a Palm Beach medical malpractice surgical error, it is advised that you seek medical care and the advice of a medical malpractice personal injury attorney.

Discuss your case with a Medical Malpractice Personal Injury Attorney Serving Palm Beach Today! Turn to Frankl Kominsky for comprehensive legal guidance. Call 561-800-8000 or use our Contact Form to set up a free consultation.