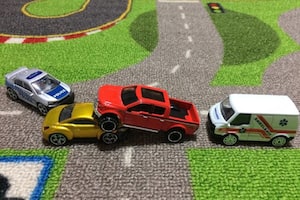 One of the most common types of automobile accidents is caused by a rear end collision. A rear end collision accident in Royal Palm Beach may result in a wide range of serious injuries and possibly even cause a fatality.

The one thing that most people tend to think has to do with the fallacy that if a rear end collision occurs, then it’s the fault of the driver in the rear. That’s because most of the time, this assumption happens to be the case. In fact, in Florida, there is a rebuttable presumption that the rear driver is the driver at fault in a rear end collision. The rear driver may be at fault for driving too closely, driving at an excessive speed or driving while distracted.

In Royal Palm Beach, all drivers operate under a no-fault law, which means that the driver’s own insurance is obligated to cover 80 percent of an injured driver’s medical bills. (SB 896: Motor Vehicle Insurance) In Royal Palm Beach, drivers are required to obtain a PIP Insurance policy (personal injury protection) that is worth $10,000. But in many cases, a person’s rear-end accident may generate medical bills that can far exceed the PIP $10,000 requirement. This is especially true with rear end collisions that may involve severe and permanent injuries.

Auto Accident Claims: What Happens When PIP Insurance Is Exhausted

There are many occasions in which the injuries that have been sustained in a rear end collision are far too serious to be completely covered by a personal protection policy. In cases such as this, an injured driver may decide to file a claim against the driver who is at fault. You may definitely see this occurring in cases where there is a hospital stay, months of medical treatment or injuries that have resulted in a loss of income.

One of the more common injuries that can occur in a rear end collision accident is whiplash. Whiplash can result in something as minor as sore neck muscles or it can be serious enough to actually break the neck of the victim. You’ll also find that there are varying degrees of neck injuries, from whiplash, that can result in different consequences.

As mentioned earlier, it may be assumed by the driver of the vehicle in front that the driver in the rear will be considered liable for any damages that have occurred in the accident. But it’s possible that the driver in the rear has engaged the services of an accident attorney that argues mitigating circumstances were involved and that the injury is less severe than what has been stated. This is where you can find that an experienced rear end accident attorney is exceptionally useful.

What are some of the injuries that you would expect in a rear end collision accident?

Injuries may take an extended amount of time in order to heal, even if they are not life-threatening. There can also be a significant amount of pain and limited mobility associated with the recovery process as well. And, as previously mentioned, even a diagnosed minor injury, such as neck soreness, may actually be covering up a difficult-to-detect fracture of the skull. In time, this can lead to serious mobility issues, paralysis and even death. In addition, the appearance of a simple bruise can be the beginnings of an internal hemorrhage, which may be indicating worsening organ damage. Other common rear end collision accident injuries may include:

One other situation that you want to think about is attempting to deal with the other driver’s attorney, while you are in the middle of healing from your injuries. This can place a potentially huge amount of stress on you and can even interfere with your recovery. Taking a small amount of time in order to consult with a personal injury attorney can be a very practical way to proceed. Plus, the initial appointment is free of charge – so there’s nothing to lose.

What statutes in Royal Palm Beach pertain to driving too closely to another vehicle?

Traffic safety is in the best interests of all drivers on the road. Certain statutes have been enacted to specifically address the possibility of rear end collisions. These are:

While it’s relatively common to assume that the driver in the rear of a rear end collision accident is the one who will be found at fault, there are some cases in which this isn’t true. For example, a question may arise as to whether or not the tail lights in the front vehicle were working correctly. It may be asked whether or not the front driver’s turn signals were working properly. In situations in which a mechanical issue has prevented the signals from working the way that they should, then it’s possible that it may be considered a mitigating circumstance.

Another type of situation that may be considered a mitigating circumstance is a scenario in which a sudden, unexpected turn was performed by the car in front. If there was no actual justification for the unexpected turn, then the court may decide that the rear vehicle wasn’t completely responsible for the crash. However, if the vehicle in front was actually forced to come to a sudden stop, then that particular circumstance may be figured into the court’s decision.

In addition, there are some other situations and rules that can apply to rear end collision accidents in Palm Beach. For example, it can be questioned just who was performing a negligent action. Another factor involves considering the degree of negligence. These are issues that the courts may take into account when placing the actual accident within its proper context. This will assist them when it comes to determining degrees of culpability. But, as in lawsuits, in general, the questions to be asked are:

Because “Comparative Negligence” is applied in Royal Palm Beach (and the rest of the state), you may discover that you may only receive a percentage of the damages that have been requested. In addition, even if you are found to be liable for the accident then, under comparative, you may be held liable for less than 100% of the damages. This boils down to an assigned percentage of the damages that will be awarded under complete comparative negligence statutes. Interestingly enough, only 12 other states follow this fault assessment procedure.

Of course, there are other situations in which a defendant doesn’t possess any insurance at all. This happens when a driver decides to forego insurance or have let their insurance policy lapse. This is one of the reasons why it’s suggested that a Royal Palm Beach driver obtain insurance that has an underinsured driver provision.

Dealing with professionals while you’re trying to recover your damages

Deaths and injuries from driving can be the result of catastrophic rear end collision accidents, which may occur in Royal Palm Beach at any given time. If you or a loved one are injured in a rear end collision crash, it is advised that you seek medical care and the advice of a car accident personal injury attorney.

Discuss your case with a Rear End Collision Personal Injury Attorney Serving Royal Palm Beach Today! Turn to Frankl Kominsky for comprehensive legal guidance. Call 561-800-8000 or use our Contact Form to set up a free consultation.