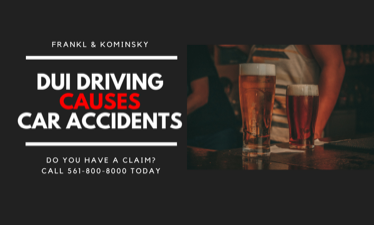 It is illegal to drive drunk or drugged in the state of Florida, but intoxicated drivers still get behind the wheel. These motorists often cause catastrophic, or even fatal, crashes. At Frankl Kominsky, we are committed to aggressively representing the rights of people injured by drunk drivers. Our auto accident attorneys have helped countless victims and their families within and beyond West Palm Beach hold those who hurt them accountable. We can assert your right to compensation if you suffered injuries in a DUI crash.

Alcohol and drugs play a role in thousands of Florida traffic accidents. In 2012, the Florida Department of Highway Safety and Motor Vehicles reported that alcohol was confirmed or suspected in over 17,200 crashes, which caused more than 12,000 injuries. Alcohol was also a confirmed or suspected factor contributing to 805 fatal car accidents, in which 877 people lost their lives. Drugs played a role in 1,798 Florida collisions.

Negligence as a Matter of Law

Drunk or drugged drivers can seriously harm other people on the road. You can file a personal injury claim against the motorist responsible if you were hurt in a DUI accident. In most car crash cases, the victim has to show that the defendant was negligent. In other words, you would need to prove that the defendant had a duty to exercise reasonable care, breached this duty through his or her actions, and caused injuries from which you incurred damages.

In DUI accident cases, however, the victim does not necessarily need to show all of these elements. Instead, the injury claim may be based on negligence per se. This rule applies when someone violates a statute intended to protect a certain group of people from a specific type of harm. If a person is negligent per se, he or she is negligent as a matter of law. This means that the victim does not need to establish that the drunk driver had a duty of care and breached the duty. Instead, the victim can point to Florida’s DUI law and hold the defendant liable if the violation of that statute resulted in injuries and damages.

A DUI accident victim may also have a negligence claim against the establishment that served or provided alcohol to the driver. Establishments, such as bars, and individuals are generally not responsible for a drunk or drugged driver’s actions. Florida law, however, provides two instances in which an establishment may be liable for a DUI accident. These are if the person who furnished the alcohol to the driver knew that he or she was a habitual drinker, or if the motorist is younger than 21.

Damages Available After a Crash

DUI accident victims can recover a wide range of economic and non-economic damages. An injured person can seek compensation for medical expenses, property damage, lost wages, and pain and suffering. You must file a claim within four years from when the crash occurred, or Florida law may bar you from filing your claim.

The car crash lawyers at Frankl Kominsky provide diligent representation to victims of DUI accidents and their families throughout Palm Beach County. Our attorneys are passionate about standing up for the rights of our clients. If a drugged or drunk driver harmed you, we have the legal acumen and skills to help you hold that person accountable. We serve clients in Delray Beach, Boca Raton, and Lake Worth, among other nearby communities. Call us at (855) 800-8000 for a free consultation, or complete our online form. We speak Spanish and Creole.

Free Consultation
Local Injury Lawyers
Common Causes of Car Accidents
Car Accident FAQs
Car Insurance Questions
Consultation Resources
Car Accident Lawyers Nearby
Client Reviews
★★★★★
I have had experience in the past using other attorneys and law firms however the attorneys and staff at Frankl Kominsky are by far the best experience I have ever had. Thank you for everything this law firm has done. I recommend this law firm to everyone. By Bruce
★★★★★
This was an amazing injury law firm. Steven and his staff was available when I needed him and were always following up with me. I felt very fortunate that I found them. It is true that this law firm will never settle for less! I fully recommend this law firm to anyone that needs a hardworking and results oriented law firm. By Consuelo
★★★★★
Mr. Frankl came very highly recommended by two separate peers. I had a handful of lawyers to choose from and I chose him. He moved quick, no nonsense, and very effective. Before I knew it everything was handled and I had a serious burden lifted. If I ever have a problem again, I am going straight to him. It is that simple. By Kelly
★★★★★
I called Mr. Frankl and his firm about a motorcycle accident case and he helped me through the entire process. Mr. Frankl made me feel like my situation mattered to him and didn't treatment me like just another file in a file cabinet. He is smart, energetic and a true fighter. I am glad to call him my lawyer and I highly recommend Frankl Kominsky for your personal injury case. By A Personal Injury Client
★★★★★
Mr. Frankl was such an asset to have on my team while I picked up the pieces following an accident. Right from the beginning he assisted handling the insurance companies, rental car companies, auto body shops, police reports, it was incredible. His guidance allowed me to focus on the most important thing and that was my medical condition & recovery. Should you find yourself in this unfortunate situation do yourself a favor & trust this man & his expertise. By Damon
View More
Submit a Law Firm Client Review