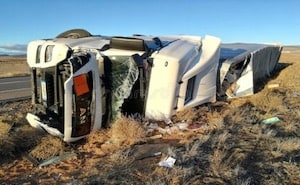 A truck driving accident can lead to a devastating result when it comes to property damage, personal injury and even fatalities. When it comes to personal injuries, unfortunately it isn’t uncommon for one of these accidents to lead to; total or partial paralysis, traumatic brain injuries or disfigurement. In order to keep these types of accidents from occurring in West Palm Beach, a truck driver training school in Florida is required to ensure that their drivers are sufficiently trained under state and federal law.

The training that is undergone by future truck drivers is extensive. Once a driver is on the road, they are required to adhere to specific rules regarding working hours and keeping detailed records of their driving activities. However, there are occasions in which a driver has been trained by a “school” that doesn’t follow the statutes that are set down for the safety of drivers and other motorists. These “fly-by-night” schools are only interested in making a profit from those unsuspecting individuals who wish to start careers as commercial drivers.

When this happens, it creates a dangerous situation for those who are driving in West Palm Beach. If you are injured in a West Palm Beach trucking accident you may wish to turn to an experienced truck accident attorney in order to receive the compensation that you deserve.

A person who is seeking to attend a legitimate truck driving school should be aware of certain credentials that are mandated by law. This will assist them when determining that the school they wish to attend is in keeping with Florida statutes. It is also incumbent upon a trucking company to ensure that the drivers it hires are trained sufficiently for the tasks that they are assigning. There are a number of statutes when it comes to the regulation of a truck driving school. These include:

Another issue that frequently occurs is a trucking company that decides to hire an inexperienced and undertrained driver. A commercial truck driver will require the proper training in both classrooms and on the road. The reason for this has to do with the fact that a truck driver will usually run into difficult maneuvers, such as performing a wide turn.

But the training can be relatively expensive and there can be a shortage of trained truck drivers who are available for work. Without a sufficient number of truck drivers, a trucking company cannot meet the needs of their clients. Therefore, you can have a situation in which a Florida trucking company decided to forego hiring a graduate form a reputable truck driver training school. Hiring a driver with less knowledge and experience can, in turn, result in devastating consequences in the form of truck accidents.

Truck drivers in Miami are expected to undergo extensive training as well as a careful screening and monitoring to ensure that they can drive safely. While truck drivers receive much more training than the average passenger driver, driver mistakes do occur and in some cases lack of correct training is the cause. Some truck companies hire under-qualified drivers due to poor hiring policies or due to hiring pressure. Truck drivers who are less qualified are more likely to cause an accident, simply because they lack the skills needed to drive a large truck safely.

When a commercial truck is fully loaded, it can cause an accident that involves several vehicles. Therefore, a trucking company that hires under-qualified drivers may be determined to have been negligent in its hiring practices. An experienced truck accident attorney in West Palm Beach is able to perform an investigation while strategically pursuing justice on the victim’s behalf.

Will My Insurance Be Sufficient in Order to Cover My Truck Accident?

A West Palm Beach truck accident is usually not just a personal injury catastrophe. It may also be a financial disaster, as well. Here, the victim may run into; years of medical expenses and huge medical costs along with loss of personal and family income. These expenses can often add up to hundreds of thousands or even millions of dollars when spread out over the victim’s lifetime. Unfortunately, few individuals will have the necessary resources in order to pay for these costs on their own.

It’s true that insurance coverage is designed to assist with the payment of these expenses. But an insurance company is also a business. This means that its primary objective is to resolve a financial issue as expediently and cheaply as possible. However, even under the best of circumstances, it’s all too common for an accident victim’s insurance funds to simply run out. At this point, financial distress may ensue and bankruptcy may be the only recourse. This is a reason why it may be important to consult with a West Palm Beach truck accident attorney as soon as possible after your truck accident. You will want to appropriately safeguard your rights to obtain fair compensation.

In addition, obtaining compensation for a truck accident may become a complex affair that requires an abundance of legal knowledge. This is especially true when dealing with a trucking company’s experienced attorneys who are very knowledgeable about these sorts of proceedings. As an accident victim, you need to remember that while this may be your first truck-related accident, there are those who deal with these situations all the time. Trucking companies and trucking company attorneys cannot operate successfully if they are unprepared to handle an accident-related situation in the most expedient and cheapest way possible.

For example, under certain circumstances, they may offer you an initial settlement that may appear to be a very large sum of money. But let’s face it, the trucking company’s attorneys are not considered a charitable organization. From experience, they know the amount to offer that may be tempting for an accident victim to take. However, it will most likely not be enough to handle all the subsequent costs that you may be likely to face.

This is the primary reason why it is strongly advised that you don’t accept any settlement offered by the trucking company, without first consulting with your own West Palm Beach truck accident attorney.

What Should I Do in the Case of a Truck Driving Accident?

As with all other driving accidents, you will first want to calmly check for any injuries and safely secure the accident site. Calling for police assistance and exchanging information is also something that you’ll need to do. Extra steps such as photographing the scene of the accident from multiple angles are also advisable.

Then you’ll want to visit your doctor or a local hospital emergency room. Even if you are fortunate enough to walk away with no visible injuries, it’s important to get a medical checkup. That’s because many different types of injuries can manifest themselves days after the actual accident. Some of these “hidden” injuries may also be life threatening. Your next step would be to obtain a free initial compensation with a skilled West Palm Beach truck accident attorney.

One of the most important reasons why you may wish to consult with a West Palm Beach truck accident attorney as soon as possible is the possibility of a loss of important evidence. Also known as spoilage of evidence, this can occur in situations in which the trucking company has decided to eliminate certain pertinent pieces of evidence that could be used in litigation against it. However, an experienced truck accident attorney will know what to do in order to quickly secure any important evidence and minimize any evidence spoilage.

In the case of truck driver training school or trucking company training negligence, you may wish to pursue compensation for your loss and any potential future expenses. You may also be able to file a wrongful death claim if a relative died as a result of the accident. For a personal injury claim, there is a four year time limit for filing and a two year time limit for filing a wrongful death claim. These time limits will usually begin from the date of the accident.

When you have been involved in a West Palm truck accident that has resulted from a poor truck driver training school, it’s important to consult with a personal injury attorney, in order to try to receive the best care and compensation that you rightfully deserve. Therefore, when you are involved in a West Palm Beach vehicle accident, seek immediate medical care and contact a Florida personal injury attorney.

Discuss Your Case with a Truck Accident Personal Injury Attorney Serving West Palm Beach Today! If you were injured in a vehicle accident in West Palm Beach, turn to Frankl Kominsky for comprehensive legal guidance. Call (561) 800-8000 or use our Contact Form to set up a free consultation.