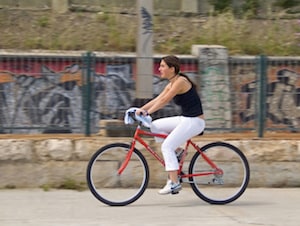 Bicycling is increasing in popularity in Pompano Beach, as recreational bicyclists and commuters seek to take advantage of the beautiful South Florida weather and scenery. Many visitors and residents of Pompano Beach prefer bicycling to driving a car, and enjoy the freedom and exercise of bicycling.

Unfortunately, however, as biking increases in popularity, so does the possibility of bicycle accidents due to negligent car drivers. If you or a loved one has been involved in a bicycle accident, the experienced attorneys at Frankl Kominsky can help.

Cycling is increasingly popular in Pompano Beach and throughout Florida. Bicyclists ride for sport - with A1A often crowded with serious riders on any given weekend - to commute to and from work, or even for general transportation. Wider bike lanes, short commutes, and general emphasis on health are all contributing to this new movement. But Florida remains at the top of the list for bicycling deaths. According to the Center for Disease Control and Prevention, Florida has the highest rate of bicycling deaths of any state in the nation. Florida records .57 deaths per 100,000 people, which is more than double the nationwide rate of .23 deaths per 100,000 people.

One of the biggest threats to cyclists is negligent drivers who fail to see bicyclists. Roads in Pompano, like elsewhere in Florida, are designed to facilitate automobile traffic, not necessarily for cyclists or pedestrians. Some roads lack bicycle lanes, and those that have lanes are often narrow. Moreover, car lanes are wide and flat, often encouraging high speeds by drivers.

And in any automobile-bicycle crash, the bicyclist is the likely loser. Even when a cyclist follows all rules of traffic and takes safety precautions, they can still suffer thanks to negligent drivers. Distracted drivers, drivers under the influence of drugs or alcohol, speeding drivers, drivers who fail to obey traffic laws, and inattentive drivers can all cause serious injury to bicyclists.

An accident involving a car and a bicycle almost always leaves the cyclist with some type of damage. This can include abrasions, bruising, serious cuts, broken bones, spinal cord or brain injuries, or even death. Cyclists can face medical bills, physical therapy bills, loss of wages, property damage, pain and suffering, and other costs due to the negligence of drivers.

If you or a loved ones has suffered injuries from a bicycle accident because of a negligent driver, Frankl Kominsky can help. Our legal team has represented numerous Pompano Beach cyclists who have been hurt through no fault of their own, working to get them the best possible outcome. We know that each case is unique and requires a tailored approach. We also understand that insurance companies can be biased against cyclists, and we are prepared to fight to get bicycle accident victims the compensation they deserve. Frankl Kominsky will work with you to help get justice in your case. We not only help victims in Pompano Beach, but also throughout South Florida, including Boynton Beach, Delray Beach, and Lake Worth. Call us today for a confidential consultation, at (855) 800-8000, or contact us online. We speak Spanish and Creole.