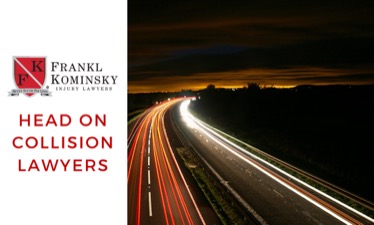 Any automobile accident can cause a serious injury in Boynton Beach. Head on collisions are even more dangerous, because the cars are traveling toward each other - sometimes at a high rate of speed - so the impact is essentially twice as serious. In other words, the speed of the two cars combines to make the impact greater than it would have been if only one car was involved or if the cars were traveling the same distance. With a head on collision in Boynton Beach, the driver, passengers, and bystanders can all suffer very serious injuries or even death.

Because of the complexities and extent of likely injuries in a head on collision, victims are encouraged to seek legal information if they have been involved in a head on crash. Boynton Beach victims can call the attorneys at Frankl Kominsky for an evaluation of their particular situation and for consultations of how to proceed with their case.

Automobile accidents happen every day in the United States. Last year, there were almost 400,000 traffic accidents in Florida, according to the Florida Department of Highway Safety and Motor Vehicles. There were 1,569 crashes in Boynton Beach alone last year.

Impact of Head On Collisions

Anyone who has been in a head on collision may incur medical costs, both immediate and long term. They may need ongoing therapy or medications, medical equipment, hospital care, or other medical attention, and may be entitled to recoup the costs of those treatments. Victims may also be able to recover damages for lost wages, pain and suffering, and funeral or burial costs.

Only a qualified, experienced attorney can weigh your individual case and help craft a strategy to get the compensation you deserve.

The law firm of Frankl Kominsky has wide experience in representing all types of accident victims, including those who have suffered in head on collisions. Our attorneys know how debilitating and difficult it can be to deal with injuries, and we work hard to bring perpetrators to justice.

If you or a loved one in Boynton Beach was the victim of a head on automobile collision, Frankl Kominsky can help. Call at (855) 800-8000 or fill out our online form for a free consultation. We serve clients in South Florida communities such as Boca Raton, Boynton Beach, Delray Beach, Lake Worth, and Palm Beach Gardens. We are fluent in Spanish and Creole.